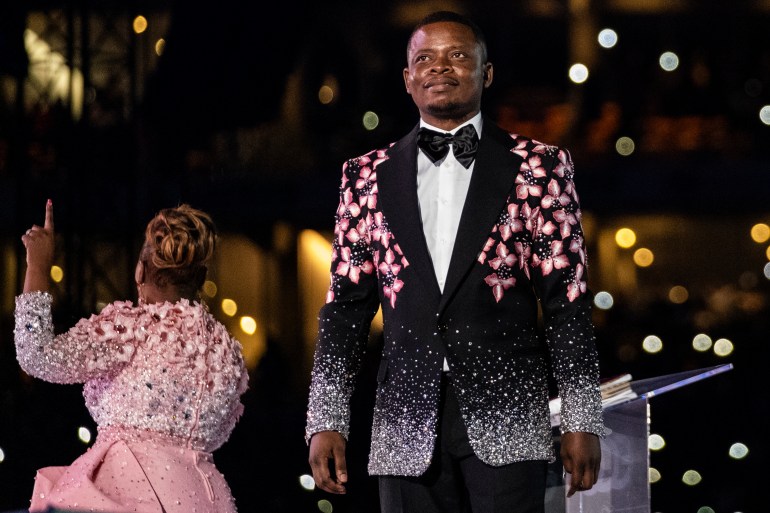 A prophet has landed himself in trouble after he allegedly lied to a woman last year in November 2021 that she will be pregnant.

According to church members who witnessed the beating today during a service in Misisi compound in Lusaka, Zambia, Prophet Mega seer was met by the husband to the woman in question after getting a lot of money from her.

According to the husband, Prophet Mega seer has been directing the woman in question pay a fee constantly for her to be pregnant.

The angry husband who was very angry – reached the church before he asked the congregants to identify who mega seer was.

“Excuse me people of God, pardon my entrance, I’m only looking for Prophet Mega seer. I want to have a word with you sir outside” he requested.

Prophet Mega seer then made a request to his congregants to be excused to talk to the visibly annoyed man.

“Sir, I’m here because you have been making my wife pay for a child. Do you know this woman?” Asked the man while pointing at the Wife.

“Before Prophet Mega seer could respond the man slapped him as the Prophet tried to look for rescue from his church members.

“I work hard for my family, I wake up early in the morning to look for food for her and my children, I leave money all the time but my wife has been giving this lazy man calling himself a Prophet for a child”

”I have advised my wife over and over to stop going to these Pentecostal churches. How can a grown up man like him start deceiving people to pay for miracles? Yes, our wives can be so desperate but as a man of God you are supposed to guide them and help them, not making them pay. I know he can’t pay back the money, but I wanted to teach him a lesson” the angry husband said.

Meanwhile church members were left in awe after the Prophet ran for his life and locked himself in the other room of the church.

It is yet not known of Prophet Mega seer will report the matter to the police.

Congregants had a tough time in Lusaka’s Chawama constituency, Misisi compound to stop the beating of Prophet Mega seer.