] Nollywood: I Hope I Finally Get To Kiss You – RMD Tells Sola Sobowale - educonsults 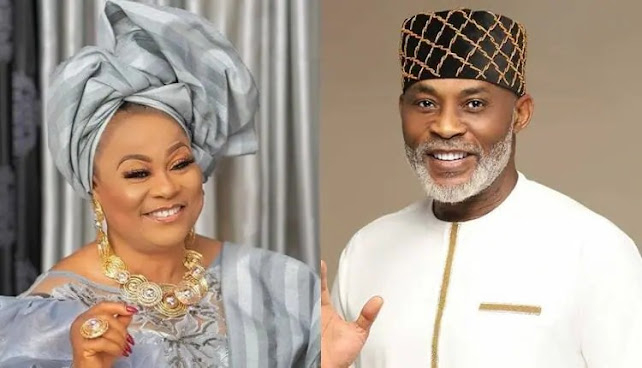 The thespian said this while recounting how he had shared movie roles with the female actress for over three decades.

Naija News understands that Sobowale and RMD have appeared in several movies as husband and wife. Going down memory lane, RMD said it was unbelievable to know that he is yet to lock lips with Sobowale in front of a camera after 37 years of sharing movie scenes.

RMD, however, believes he will eventually get to lock lips with Sobowale on a movie set within the next 10 years.

Naija News understands that the duo expressed themselves while responding to questions to promote the recently released series, The Return Of The King.

Sobowale had shared a snippet of the interview on her verified Instagram page detailing the first time they met in 1984.

“We met about 37 years ago, in 1984, Surulere, at Tade Ogidan’s place. We have played husband and wife several times and it hit me the other day that I have never kissed you in a movie. Hopefully, we will get to kiss as Reverend Ifeanyi and the king; I want to be able to kiss the king,”

Responding to Sobowale’s question on why he chose to be an actor, RMD said: “I think for me, it has been something I have always done from when I was a child. I played a lot when I was a child. In Warri, we called it ‘playing mama and papa’, which, in English, we call playing ‘house’.

“When it was time to fill my JAMB form, the theatre was the most natural thing for me to do. What I find amazing in the life of an actor is the fact that once you catch the bug, you do not want to go out of it.”

“In 10 years, I will be 70 and my prayers will be that we will still be doing this. There will still be some springs in our steps and I will finally get to kiss you,” RMD said.