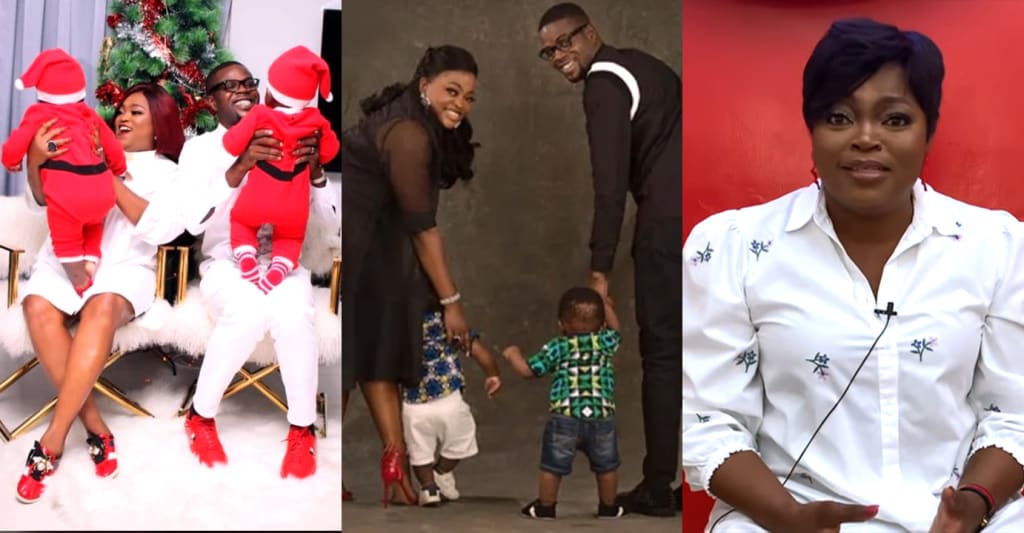 Nollywood actress, Funke Akindele-Bello, has revealed why she keeps her children’s faces away from the eyes of the public.

The 45-year-old actress was previously married to Adeola Kehinde but divorced in July 2013, due to irreconcilable differences.

However, she is currently married to Nigerian rapper JJC Skillz. In December 2018, the union was blessed with twin boys.

Mrs Akindele-Bello has a strong social media presence as her fans are well abreast with trending updates on the actress’s personal life. Although she is in the habit of posting personal content and behind-the-scenes footage of her life, her fans are eager to see one thing which they have not yet – her children’s faces.

During an interview with TVC, the Mrs Akindele-Bello explained the reasons behind her decision not to showcase her children’s faces to her fans, she said:

“Okay, the children’s face, is that what you’re trying to say? No. When they’re old enough, they should show their face. If they want to, they should show their face. But for now, I don’t want them to show their faces. I want them to have their life, and enjoy it. Their dad and I are already in the public eye. They are children, don’t forget. They are children. They’re vulnerable so you have to just keep them away, keep them safe. Let them go to school, let them enjoy their life without “Ah! That’s Jenifa’s son. That’s JJC’s son. Ah see his leg, see his face.” Leave them private!”

Asides from the identity of her children, the actress also revealed three things fans might not be aware of.

She said, “Three things my fans don’t know about me? I don’t like to go out. I love my space. I love to work so if I’m not working, I’m sleeping, I’m watching TV series, I’m playing with my children, chit-chatting with the family. I’m not really an outgoing kind of person but once in a while, I try to go out.

“Second thing: I don’t like to eat meat. I like to eat bones. If you give me goat meat or chicken, it’s too much flesh. I just take small pieces of flesh.

Then the third one? Ha. I think they know everything!”

Mrs Akindele-Bello, who is also a lawyer, is one of the most successful Nollywood actresses in contemporary times. She starred in the sitcom ‘I Need to Know’ from 1998 to 2002. She, however, rose to fame for her role in the movie titled Jenifa, which earned her the nickname Jenifa.

She has hit series like Jenifa’s Diary, My Siblings and I, Aiyetoro Town and hit movies like the record-breaking Omo Ghetto: The Saga, , ll coming from her production company, Scene one Productions.